Location : In the center of city of Angkor Thom, 1.5km from the South Gate 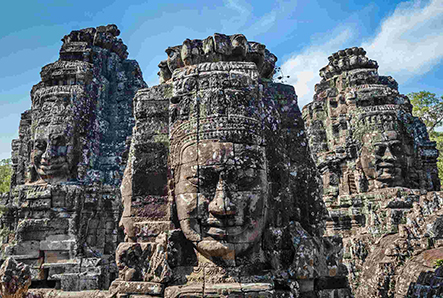 The Bayon vies with Angkor Wat as the favorite monument among visitors. The two temples evoke similar aesthetic responses yet are different in purpose, design, architecture and decoration. The dense jungle surrounding the temple camouflaged its position in relation to other structures at Angkor, so it was not known for sometime That the Bayon stands in the exact geographical center of the city of Angkor Thom. Even after topotraphical maps finally revealed its correct location, the Bayon was erroneously identified as a Hindu temple connected with the city of Yasovarman I, and, thus, dated to the 9th century.

A fronton found in 1925 depicting an Avalokitesvara, identified the Bayon as a Buddhist temple. This discovery moved the date of the monument ahead some 300 years to the late 12th century. Although the date is firmly supported by archaeological evidence, the Bayon remains one of the most enigmatic temples of Angkor Group. Its symbolism, original form, subsequent changes and additions have not yet been understood. These aspects leave us today with a complicated, crowded plan that challenges both archaeologists and historians.

The Bayon was built nearly 100 years after Angkor Wat. While its basic structure and earlier part of the temple are unknown, it is clear that the Bayon was built on the top of an earlier monument, that the temple was not built at one time, and that it underwent a series of changes. the middle portion of the temple was extended during the second phase of building. The Bayon of today with its huge central mass dates to the 13th century and belongs to the third and last phase of the art style Jayavarman VII's goal was to rebuilt the capital and to bring to the kingdom a new vibrancy, signifying a bright future for the Khmers. To accomplish this, he erected the Bayon and created a structure somewhat like temple-mountain in its grandiose plan and scale.

The architectural composition of the Bayon exudes grandness in every aspect. Its elements juxtapose each other to create balance and harmony. Over 200 large faces carved on the 54 towers give this temple its majestic character. 'The faces with slightly curving lips, eyes placed in shadow by the lowered lids utter not a word and yet force you to guess much', wrote P Jennerat de Beerski in the 1920s. It is these faces that have such appeal to visitors and reflect the famous 'smile of Angkor'.

The iconography of the four faces has been widely debated by scholars and, although some think they represent the Bodhisattva Avalokiteshvara, in keeping with the Buddhist character of the temple, it is generally accepted that the four faces on each of the towers are images of king Jayavarman VII and signify the omnipresence of the king. Besides the architecture and the smiling faces, the highlight of Bayon is undoubtedly the bas-reliefs presented in both the inner and outer galleries. the scences in the outer gallery are unique as they depict many scences from daily life.

The directory 'Gallery/bayon' does not exist. Check your parameters.